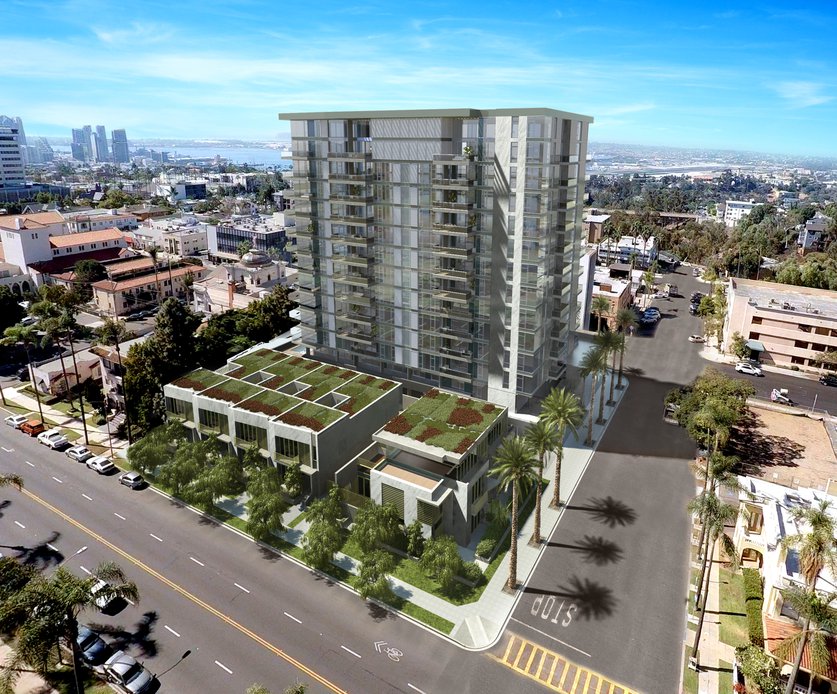 A new plan to build a 13-story luxury condo development in Bankers Hill with units costing more than $1,000 per square foot could set a record for San Diego real estate.

The condos are expected to range from 1,500 to 4,950 square feet and cost $1.5 million and $3 million and up. At that price tag, the multi-million dollar units are setting a record for dollar amount and size — and could provide a substantial boost to real estate in San Diego.  The development by Zephyr Partners is called “The Park” and plans call for 63 units as well as ground floor town homes that range from 2,600 to 3,000-square feet.

The Park will include 63 condos in a 13-story tower. Rendering courtesy of Zephyr Partners/Dialog Design.

Construction is scheduled to begin in June next to Balboa Park, with development by Zephyr Partners. The developer has begun to demolish the Sixth Avenue Medical Center on Palm Street to make way for the project, with construction ending in early 2017. Zephyr Partners is aiming the luxury condos to clientele accustomed to luxurious living spaces, but who want to downsize in the city yet still have exclusive amenities.

The condos in San Diego are expected to boast plenty of luxe features – private elevators; 400-square foot balconies four times the size of typical condo units their size; large walk-in closets and storage spaces enclosed in the garage; customized gyms and pools; and a community room with an upscale kitchen and fire pits outside.

The Park would rival Park Laurel, which was developed in 2003, at Sixth and Laurel. That property’s resales currently go for $890 per square foot, and have helped to revitalize the area. The Park is the second luxury condo development announced in San Diego in recent months.

There are a limited number of downtown San Diego condos for sale, and help bolster demand for downtown luxury living.