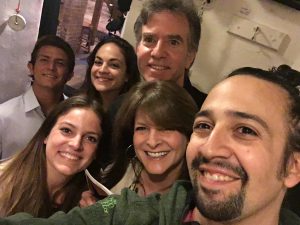 You will understand if you were among the many eager theatergoers who tried, but failed, to score tickets to the quickly sold-out touring musical “Hamilton” that plays in San Diego next month.

As Coden’s middle name suggests, she is a member of the influential Nederlander family that expanded from a Detroit base to acquiring theaters across the country, including the Richard Rodgers Theatre that stages “Hamilton” on Broadway. For more than 30 years, the Nederlanders, under the flag of Broadway/San Diego, have booked touring shows at the San Diego Civic Theatre.

While she is not active in the theater industry, Coden’s connections and knowledge came in handy when she and husband, Dr. Daniel Coden, got the idea of harnessing the show for a fundraiser.

Last April, she started negotiating with “Hamilton” producers and theater operators to buy a block of 500 tickets in rows 2 through 17 of the orchestra section for the Saturday evening show on Jan. 13.

After winning their support, she then put together charitable ticket packages. They’re pricey but have a distinct advantage. Instead of paying inflated prices to a ticket broker, attendees can buy tickets on her website and claim a tax deduction for excess costs..

She plans to split all profit between the Jewish Family Service and Lawrence Family Jewish Community Center (she’s on its board). Plus, she has added special perks.

For $1,500, the seat is closer and valet parking is included. And, at $2,500, a VIP dinner at the U.S. Grant is thrown in, including a private Q&A with a “Hamilton” cast member and a chance to win two backstage passes.

“We are thrilled,” says Coden, a real estate agent for Pacific Sotheby’s International Realty. After expenses, she hopes to net $200,000 for each charity from the one-night performance. “I consider myself to be very fortunate to have this opportunity.”