“Liz Nederlander Coden and Daniel Coden Day” in the City of San Diego awarded by Mayor Faulconer for their fundraising efforts
15420
post-template-default,single,single-post,postid-15420,single-format-standard,bridge-core-2.4.5,ajax_fade,page_not_loaded,,qode-title-hidden,qode_grid_1300,qode-theme-ver-23.0,qode-theme-bridge,qode_advanced_footer_responsive_1000,wpb-js-composer js-comp-ver-6.3.0,vc_responsive 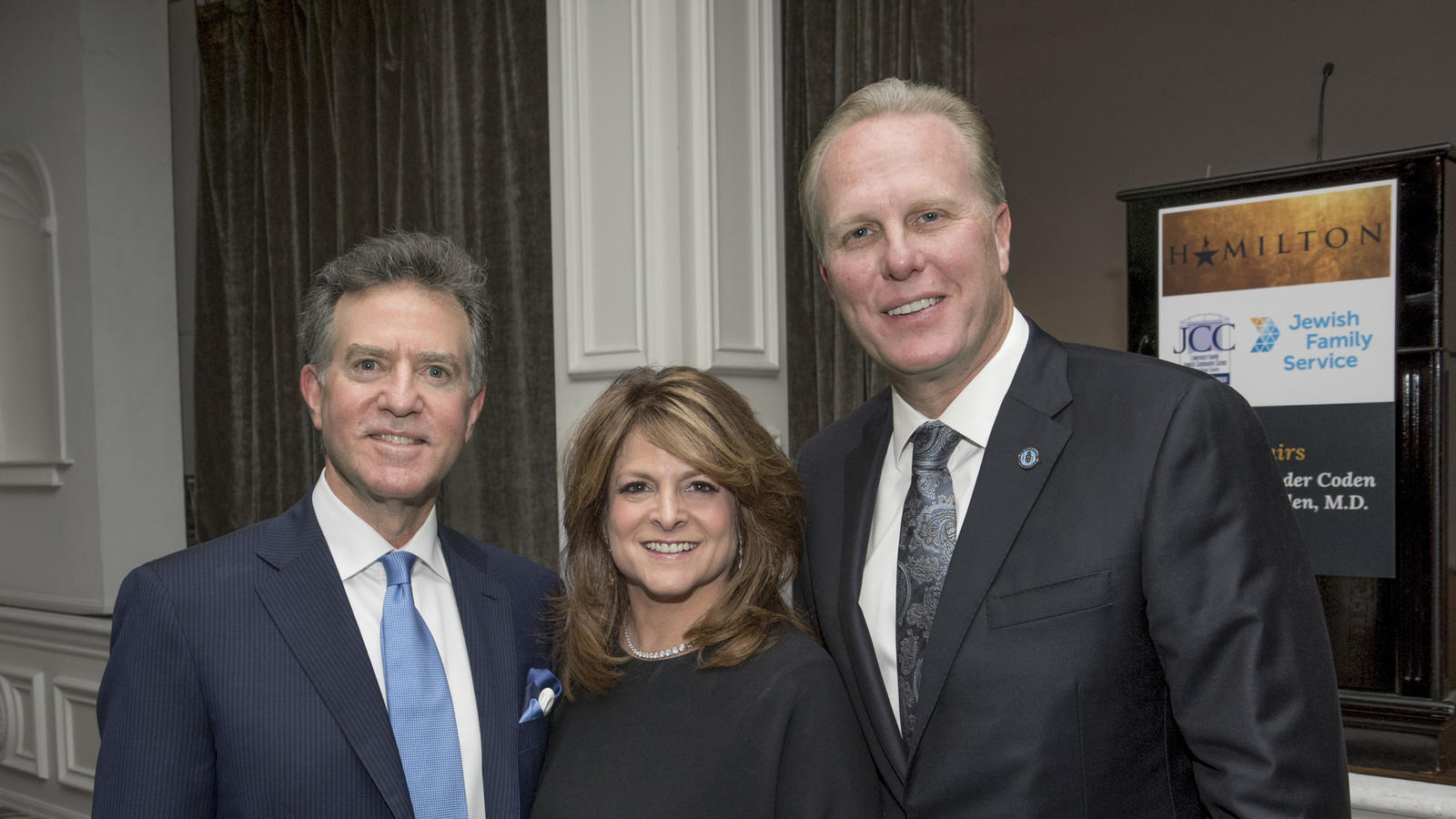 San Diego Mayor, Kevin Faulconer, proclaimed January 13, 2018 as “Liz Nederlander Coden and Daniel Coden Day” in the City of San Diego for their extraordinary fundraising efforts.  Liz and Dan conceived of and chaired a fundraiser around a performance of HAMILTON where they raised $630,000 to be shared by the Lawrence Family Jewish Community Center and Jewish Family Service of San Diego.  HAMILTON cast members were interviewed, mingled with the crowd and gave backstage tours to lucky donors.  Liz and Dan, the JCC and JFS are overwhelmed by the success of the event and are extremely grateful to the generous donors and underwriters!  A spectacular night was had by all!

Education Matters: The Hamilton effect on education may make classrooms of the future ‘The Room Where It Happens’

An illegitimate, orphaned immigrant born in the Caribbean rises to become one of the most brilliant of our Founding Fathers.

We all know by now the basic biography of Alexander Hamilton, thanks to the genius of “Hamilton” creator Lin-Manuel Miranda whose lyrics and musical production have captured the hearts, minds and imagination of thousands of devoted followers of the Broadway sensation.

But a lesser-known story is how the musical has engaged and excited students.

The inspirational rise of Alexander Hamilton to become a Founding Father, Revolutionary War hero, George Washington’s right-hand man, our new nation’s first treasury secretary and the face on our $10 bills, is not one you would think would stir young people who traditionally learn about figures in American history through dry textbook narratives.

But through Miranda’s gifted adaptation of rap, R&B, blues, hip-hop, jazz, pop and other musical genres to tell Hamilton’s story, young students are connecting to American history in ways not seen before, by means of this unique vernacular.

For the increasing population of low-income, underserved students in our communities, the musical play is particularly relevant, with its message of hope and the promise that America affords to all its people – especially the “young, scrappy and hungry.”

As for the line in the play that draws boisterous cheers (“Immigrants – we get the job done!”), the words touch the hearts of children who have come to America from other countries to escape tyranny or abject poverty – or both. It says, “You can do this” – whatever “this” is.

Diversity, in both its cast and its message, is the dominant power of the musical. We all come from somewhere else, and we all have a shot at making a difference.

The educational potential of “Hamilton” is not lost on Carmel Valley resident Liz Nederlander Coden, who has deep connections to New York theater.

She spoke about the tremendous influence “Hamilton” has had on young people.

“That is its greatest accomplishment,” she said. “My personal feeling is that Lin-Manuel Miranda and the show are changing the world. He has made the story of the birth of this nation relatable to people who could not have cared less.

“Most people just looked at our founding fathers as men with wigs from ancient times, and now they can relate to them as people who might be living and struggling today.

“The educational value of the show is profound beyond measure. I feel that he [Miranda] is educating the world.”

Coden has more than a passing interest in the musical. When she heard that “Hamilton” was coming to San Diego, she began to consider how to use the opportunity to fundraise for local philanthropic organizations.

“Your Shot In January” was the result.

Liz Coden, a realtor with Pacific Sotheby’s International Realty – together with her husband, ophthalmologist and eye surgeon Daniel Coden – negotiated with “Hamilton” producers to purchase 500 orchestra section tickets for the Jan. 13 performance.

The idea of “Your Shot In January” was to sell the tickets at premium prices, with all profits to benefit Jewish Family Service and the Lawrence Family Jewish Community Center, two groups that serve the entire San Diego community regardless of religious affiliation.

At the Jan. 13 event, the Codens announced that an astounding $630,000 had been raised, to be split between the two organizations.

In their letter to donors, the Codens wrote, “We ‘took our shot’ and are grateful to you all for your tremendous generosity in making this fundraiser an outstanding success in every way.”

San Diego Mayor Kevin Faulconer honored the Codens with a proclamation declaring January 13, 2018 “Liz Nederlander Coden and Daniel Coden Day in the City of San Diego” – for their “countless volunteer hours to organizations that serve the community.”

“Because of that, students remember them, and they learn from them,” she said. “The show is an exciting, ebullient piece of American history, doing what the best history does: humanizing the facts, making it all very personal, not just an accumulation of dates and events and battles.

“The score is terrific, but when you see it in the context of the stunning, ingenious production, history is really brought to palpable life. The specific facts may not all stay with you, but the songs that illustrate them will, and that (as we know from research on the effects of music) facilitates memory and learning.

“I don’t think any textbook can do that, no matter how well written. ‘Hamilton’ shows how compromise and government work … and how the seminal events of history always involve personal interaction.

“This is a bona fide phenomenon… and it’s phenomenal. It’s a game-changer for musicals – and for presenting history to people young and old.”

The best part about the musical, Launer agreed, is that you don’t even have to see the play to reap the benefits. The lyrics, the poetry, the dance, the beat – the “phenomenon” if you will – engage kids through the universal connective power of music.

The play brings audiences into “the room where it happens.” That may be the best path to civics education anyone could ever imagine.

To bring history to life and make what happened over 200 years ago meaningful today is the goal of the Hamilton Education Program known as EduHam.

EduHam is a partnership of the Gilder Lehrman Institute of American History, the Rockefeller Foundation and “Hamilton.”

The program uses the immense popularity of the musical to teach American history to high school students, particularly those in lower socio-economic demographics who attend Title I schools.

The Gilder Lehrman Institute of American History is the leading American history nonprofit organization dedicated to K-12 education. The Hamilton Education Program is part of the Institute’s broader mission to improve the teaching and learning of American history.

The Institute offers resources on Alexander Hamilton and the founding era in the “History Now” section of its website, including essays, videos, online exhibitions, timelines and lesson plans. [https://www.gilderlehrman.org/content/hamilton-education-program]

EduHam came to San Diego as part of the local “Hamilton” tour, to the delight of 2,800 students from 46 San Diego public schools.

The students, who studied this formerly obscure founding father for weeks before the production arrived in town, created and performed original adaptations of historical events as part of their history lessons, and were able to see a special performance of the play Jan. 11.

The response from students and teachers was overwhelming. Many teachers report that students rush to American history classes now, thanks to EduHam.

According to a San Diego County Office of Education (SDCOE) press release, Basker said, “This project is transformative. ‘Hamilton’ has struck a chord with our nation’s students because it embodies what great history education is all about: bringing the past to life and fostering connections with the exceptional individuals and moments that have made us who we are. This program empowers students to reclaim their own narrative and empowers teachers to bridge classroom learning with the stage.”

Basker, in a Variety Oct. 2017 story, described how the program energized Los Angeles students, saying, “I’ve never seen anything like it in 40 years as an educator. These kids are finding it the sexiest, most compelling period in American history because they get to enter into it personally, take ownership of events and then give voice to their version. They’re really reclaiming the founding era for themselves.”

“Hamilton” producer Jeffrey Seller, who was instrumental in developing the education program, said in the SDCOE release, “Our goal is to ensure that students have a shot to see ‘Hamilton’ and use its words, music and staging to further their understanding and enjoyment of American history, music and drama.”

Rajiv Shah, president of The Rockefeller Foundation, said in the release, “After the initial success of the partnership in New York City, we could not throw away our shot to ensure students across the United States had the opportunity to witness living breathing history.”

The local EduHam program was funded in large part by Qualcomm, The Rockefeller Foundation and the Toys R Us Children’s Fund.